The Last Voyage of The Space Shuttle

The Space shuttle is part of history, an exciting history at that.  It first flew in 1983 and had a last flight in March 2011. It was its 39th and last flight. The space shuttle is now being retired and taken to the Smithsonian Museum in Virginia.

The space shuttle was a new concept of a reusable entry vehicle and did tremendous good research. No other country could match the space shuttle, though there was talk of Japanese space shuttle, but it never took off from the ground. There were some accidents, but over all the entire space shuttle program was a success.  However about 15 crew members lost their lives in the flights. 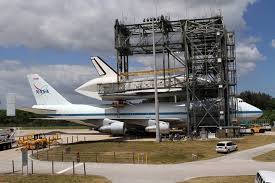 The shuttle carrier aircraft   NASA 905 has flown the shuttle on 14 occasions out of a total of 18 ferry flights. The space shuttle aircraft with its precious load will arrive at Washington Dulles International airport on Tuesday 17 April 2012. It will take a day to off load the shuttle from the back of the Boeing. After that it will be rolled over to the National Air and Space Museum located adjacent to the airport in Chantilly, Va.  Before being inducted in as an exhibit a ceremony commemorating its flights will be held.

The space shuttle brought the dream of man for a manned space ship that could enter the earth’s atmosphere and fly out again a reality.  It was launched by a rocket and entered space where it orbited the earth before making a landing on the earth. It had special heat insulators to take care of the extreme temperatures generated when it re-entered the atmosphere.

Top 24 Everyday Items That Have A Shocking Use
Diver Sees Massive Whale, Then The Unbelievable Happens
These Are The Most Uncommon Objects People Found In Their Own Backyards